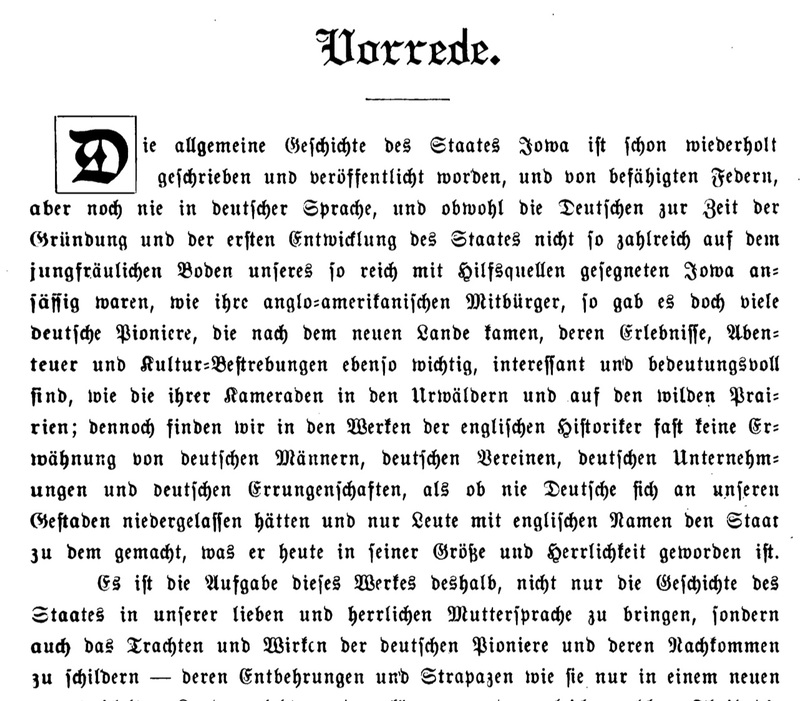 The general history of the state of Iowa has been repeatedly written and published, by competent penmanship, but never in the German language and even though the Germans were not as numerous, at the time of the state’s foundation and first development, on the virgin land of our Iowa , so blessed with natural resources, as their Anglo-American fellow citizens, there were many German pioneers who came to the new land whose experiences, adventures and cultural efforts are as important, interesting and meaningful as those of their fellows in the virgin forests and on the wild plains; yet we find almost no reference to German men, German clubs, German undertakings and German achievements in the works of English historians, as if no Germans had settled on our shores and only people with English names made the state as great and glorious as it is today.

That is why the task of this book is, not only to convey the state’s history in our lovely and wonderful mother tongue, but also to portray the German pioneers and their descendants strivings – their deprivations and trials which can only be experienced in a new and non-developed country, and, at the same time, which part the German Americans took in the state’s formation and development so that our children and children's children will not forget what the Germans did for their country (of which much is only tradition today) in the areas of farming, industry and the academic professions, what and they did for the adolescent youth’s intellectual development, what they achieved in the press, on the rostrums and in the legislative halls, what they achieved in noble music, what the German village schoolmaster achieved here, and which honorary offices, German Americans earned among their fellow citizens. It also describes our fellow countrymen’s heroic deeds on the battlefields for the preservation of the Union and is to remind our children forever of their bravery and patriotism to their adopted fatherland.In the process, the book describes different cities and small towns and at the same time sketches German clubs, churches, schools, lodges, etc.

The reports about the latter are not as complete as desirable, but it is the pastors’ and club officials’ fault, who did not or only partially answer our repeated questions and requests.Some might resent that their place and their names are not recorded and explained in detail in the book; but if one considers that it is impossible to list, let alone describe the names of 100,000 adult Germans in the state, one will realize that it is impossible, especially in one book, for which the editor only gets $2.50 whereas in Iowa one never had to pay less than $5.00 or even $12.00 and $15.00 for such a book.One must also not forget that we wanted to limit ourselves to counties and small towns in which a great many Germans settled. The book is a history book of the state but mainly a history book of the Germans of Iowa.

That this work, which is the first of its kind in Iowa, has some defects will be expected because it is human to err, I assure the interested reader, however, that the author took no mean pains to provide the Germans in Iowa with a German book of their history, which, impressed by the love for Deutschthum, might serve as an invaluable souvenir. Hoping that my work may find a favorable reception, and asking for not too severe criticism, signed,