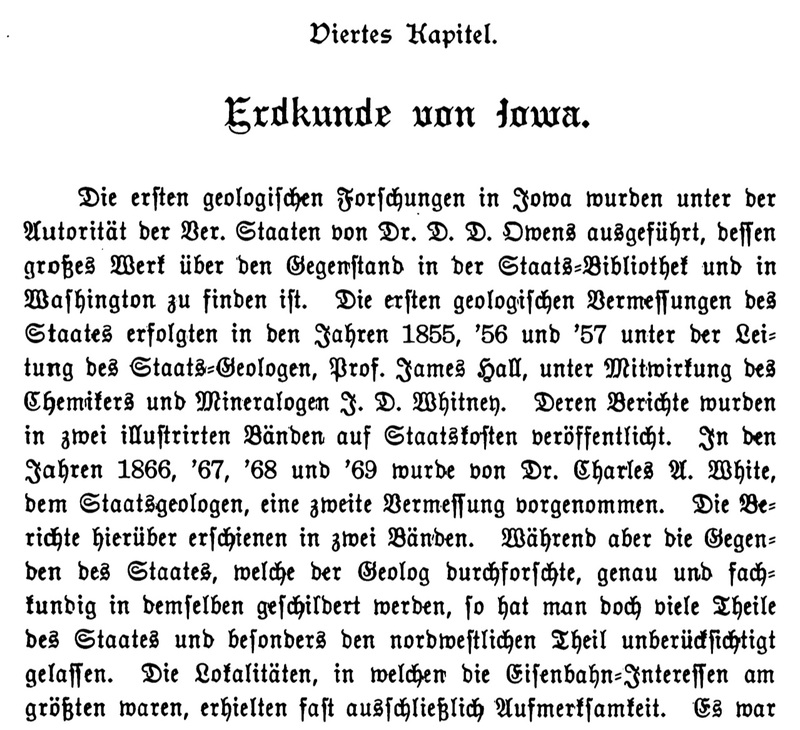 The first geological research under the authority of the United States was done by Dr. D. D. Owens, whose great work on the subject can be found in the state library and in Washington. The first geological surveying of the state took place in the years 1855, ‘56, ’57 under the direction of the state geologist Prof. James Hall, assisted by the chemist and mineralogist J. D. Whitney. Their reports were published in two illustrated volumes financed by the state. In the years 1866, ‘67, ‘68 and ‘69 a second surveying was done by Dr. Charles A. White, the state geologist. The reports on this were published in two volumes. While the areas the geologist researched are described precisely and competently, other areas of the state, especially the north-western part, were discounted. Almost only the areas of highest interest for the railroad received attention. Probably, the fact that the legislature was too ungenerous, not granting him sufficient funds to do his research more precisely and comprehensively, can be partly blamed for that.
In the year 1874 the state legislature granted almost appropriate finances for the geological survey of the state. This task was given to Prof. Samuel Calvin from the State University and to Dr. Charles R. Keyes, assistant state geologist, and to Prof. G. E. Patrick, state chemist.
Minerals of Iowa. Even though Iowa is mainly a state of agriculture, the value of the individual minerals that can be found here should not be underestimated. Those minerals are: coal, lead, bricks, gypsum, clay, zinc, iron, limestone and brick earth.
Coal. Iowa is the fifth state in coal production in the Union. Pennsylvania is the first with a production of over 36 million tons, Illinois the second producing over 12 million, followed by Ohio with 9 million, then West Virginia with over 6 million and Iowa in the fifth place with 6 million tons. The coal fields reach from Scott County on the Mississippi to Fremont County near the Missouri River and from the Missouri line north up to Hardin and Hamilton Counties and include the counties: Adams, Appanoose, Davis, Lucas, Monroe, Page, Taylor, Wapello, Wayne, Warren, Jasper, Jefferson, Keokuk, Mahaska, Scott, Van Buren, Boone, Dallas, Guthrie, Greene, Marion, Polt, Webster, Cass, Adair, Fremont, Lee, Hardin and Hamilton. The coal of Iowa is bituminous, an excellent fuel and is appreciated for producing steam.
Lead. Great quantities of lead have been found since Julien Dubuque’s settlement in the area of Dubuque, and since then the work in the mines has been successfully continued. The net yield of this ore is between 68 and 70 percent.
Bricks. Bricks can be found nearly everywhere in the state, but better quality can be almost only found near the rivers; sometimes also in the prairie where it is hilly.
Gypsum. A 10 to 20 foot thick deposit of gypsum can be found near Fort Dodge, Webster County. It includes an area of three to seven miles on both sides of the Des Moines River. The quantities are inexhaustible; it is used for building purposes, ground to flour as fertilizer, is good for stucco work and exported in great quantities.
Clay. Clay for fabricating bricks can be found everywhere in Iowa and sand in the riverbeds and on the shore. Clay of finer structure for pottery can be found in many counties and it is not only processed to make all kinds of pottery and pipes in every pottery of the state but is also sent to other states.
Zinc. Zinc mines are located near Dubuque. Recently, important smelteries have been built to produce the metal in great quantities for trade there.

Iron. Iron ore is found near Waukon, Allamakee County in four to thirty foot thick layers. Recently the exploitation of those mines began. The net output is between 52 and 60 percent.
Limestone. Limestone is found in the state in general. In the year 1893, there were 143 limestone pits in the state representing a value of half a million dollars and having an estimated production value of $236,792; the yield of burnt lime came to 365,394 barrels of 200 pounds, worth $170,043; the production value for roadwork was $70,387 so that the total production value for that year added up to the sum of $477,222.
Soil for bricks/brick earth. Almost in every part of the state excellent soil can be found. The brick production has been notably on the rise for the last years. The demand for bricks for buildings, bridges and streets has been growing from year to year and that is why the number of brickyards is rising steadily. Des Moines alone sold over 15 million bricks last year and still even then new brickyards open.
The exploitation of ore and coal deposits is only beginning and will, when fully developed, raise the commercial importance and development of Iowa significantly.