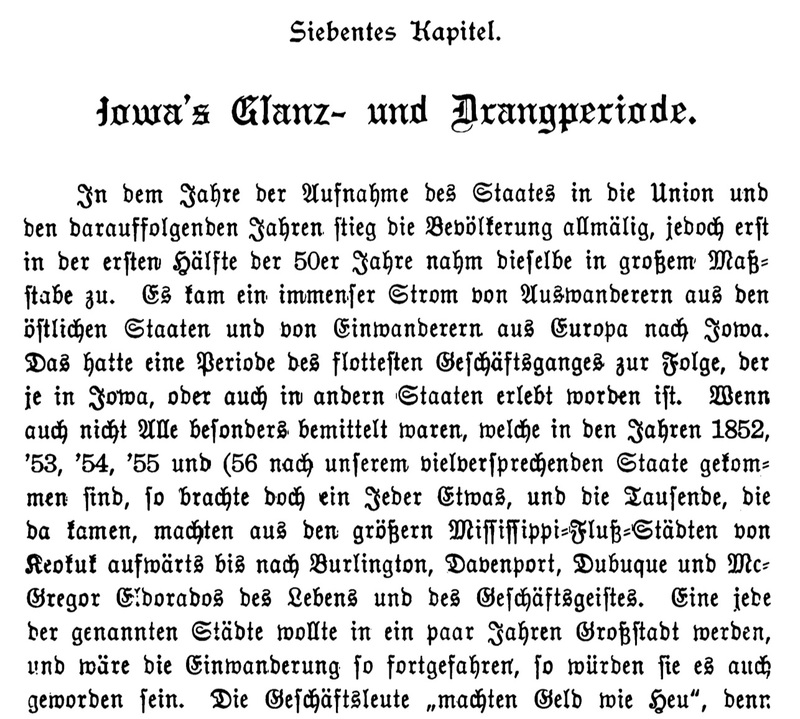 In the year of Iowaꞌs admission to the Union and the following years, the population gradually grew but it was not before the first half of the 1850s that it increased on a large scale. A huge flow of emigrants from the eastern states and of immigrants from Europe came to Iowa, resulting in a period of the briskest economic development that this state – or any other state – ever experienced. Not everyone who came to our promising state in the years 1852, ꞌ53, ꞌ54, ꞌ55 and ꞌ56, was really well off. But they all brought something along, and the thousands of new arrivals converted the bigger towns on the river Mississippi, from Keokuk upwards until Burlington, Davenport, Dubuque and McGregor into eldorados of life and tradesmen’s spirit. Every single one of these towns strove to be a major city within just a couple of years, and if immigration had continued at the same pace, they would have achieved it. Business people made heaps of money, as everyone who came to the West to secure the possession of a farm under the Homestead Act had to buy farming equipment, household effects and food, which in those days were not as cheap as today. Construction work was going on in every nook and cranny, and workers enjoyed high wages and a consistent income. As is the custom with laborers, this money was easily spent because the men did not miss out on any one of the enjoyments of life. Keokukꞌs still lovely Main Street bears witness to the great structures that were raised in those years, whereas in Dubuque

little has remained of the old buildings constructed in 1855, ꞌ56 and ꞌ57; many of them that did not collapse by themselves have been turned into heaps of ash by the demons of fire. Hotels like the big St. Cloud were built back then, so large that you will hardly find bigger ones today. Not only private individuals engaged in enterprise; cities, townships and counties were conceiving grandiose projects as well. Railroads were laid out in all directions, cities and counties contracted immense debt for railroads of which only a short track was actually built and also for other ones that were never built at all. Big dikes were erected in the bottomlands, all with borrowed money. Country roads were covered with planks to form ‘plank roads’, as they were called; big market halls and town halls were constructed; people actually did not see any limits to progress. Credit seemed to be inexhaustible, just like the citizensꞌ spirit of enterprise.

And yet, the end came. The day of reckoning and payment arrived. It was in the fatal year 1857 that the blow struck, hitting the entire country, but especially – and with an impact never since experienced – the West with its too hastily developed structures. Compared to the financial collapse of ꞌ57, the crashes of 1873 and 1893 were trifles. Back then, the crisis came like a heavy frost in June that blackens and devastates the lush green fields and gardens with its fatal breath in one single night, and paralyzed everything. Almost all banks collapsed like houses of cards as they were only based on paper, and most commercial firms, whether big or small, fell together with them. Construction came suddenly to a standstill. Houses that had not been finished remained just as they were when the crash came. All the money was gone. Sure, people still had their wildcat banknotes, but these were worthless and there was hardly any gold or silver left on the market. The hardship increased from day to day, and in order to provide relief, several towns issued their own bills or payment forms under the name ‘city scrips’ in amounts of $1 to $10. Afterwards, the bigger commercial firms began to issue their own scrips in the amount of $1 or less,

and soon there was hardly a businessman, be he a barber, shoemaker, tailor, innkeeper or whatever he was, who did not have bills from 5¢ to $1 in circulation. The author of this book used to print cards and paper bills for business people in Dubuque for a full month during the bust. Everyone issued as much as he thought he could distribute for merchandise still on hand; when, however, new merchandise had to be purchased from the eastern states, money – that is, gold or silver – was indispensable, but as people had none, except those who had been circumspect enough to hide theirs and keep it safe, the situation became even more awkward. The temporary relief provided by the versatile paper bills made it more obvious than before how financially vulnerable the great majority of people were. They had construction sites, they had houses, but these did not yield any money, and money was what the creditors wanted to get.

Those were dreary days and difficult months, and several years went by before the situation improved. The outbreak of war in 1861, shortly after this period of industrial and commercial depression, made the situation even worse, if anything. If food – with the exception of flour – had not been so cheap in the rural towns at the time (eggs, 3¢ a dozen; butter, 5¢ and 6¢, etc.), many a family would have starved to death. But it was already difficult to procure enough money for just that little bit, so craftsmen had to work for $1 a day and day laborers for 50¢, and both had to accept food or other goods as payment.

Times got better only when high enlistment payments began to circulate in 1862 and ꞌ63, but then they improved rapidly. Although the gold agio was high, and at some point nearly $3 of banknotes were required to buy as much as $1 in gold would have purchased, business started to flourish again, and money flowed out of the banks and into them. Construction activities in the West resurged, especially in the new townships and regions of our state, and it was almost like during the gaudy, roaring boom of earlier years in the river towns.

The farmers who at times got $1.50 for a bushel of wheat and $6 to $7 per centner for pigs could well afford to pay $30 and $40 for clothes which you can buy for $8 and $10 today. You might think that all farmers should have become rich in the process, and a great number of them did indeed become wealthy, but the desire for bigger farms, for large estates drove many to purchase more land. These farmers incurred debt, yet when the war ended, the value of produce went down, while everything else was still expensive. Then the due date of the interest and of the primary debt arrived, and they could not pay. The interest rate was still 10 percent, not to mention the usurious rates that some had to accept in order to rescue part of their savings.

And business people in the towns and cities were by no means better off. Although most of them were more cautious than in 1857, too many businesses were run with too little equity, and the speculation wave led to a crash, which followed in 1873 and paralyzed business again. Once more, it took several years before the citizens of the U.S. recovered from the crash, but not as long as it took after 1857 because people at least had good money, there were no wildcat banks, and even if the money was scarce, due to its hoarding in banks and hiding places, it was still good money. Then, at the end of four or five years, business was brisk again, with the same results as before – too big companies with too little genuine capital. When the day of payment came in 1893, the country went once more through a serious crisis that was somewhat worse than that of 1873 and lasted longer, due to a currency conflict that caused anxiety in financial circles. That is the way it was and will always be, when the same faults and mistakes as before sneak in as soon as the situation gets better, no matter how strong or weak the currency may be. Too few people know how to save money; too many like to speculate, as they want to get rich fast; the day of reckoning usually comes when everybody wants to be paid, and crash and crisis are back again – thus it will be until the end of times.