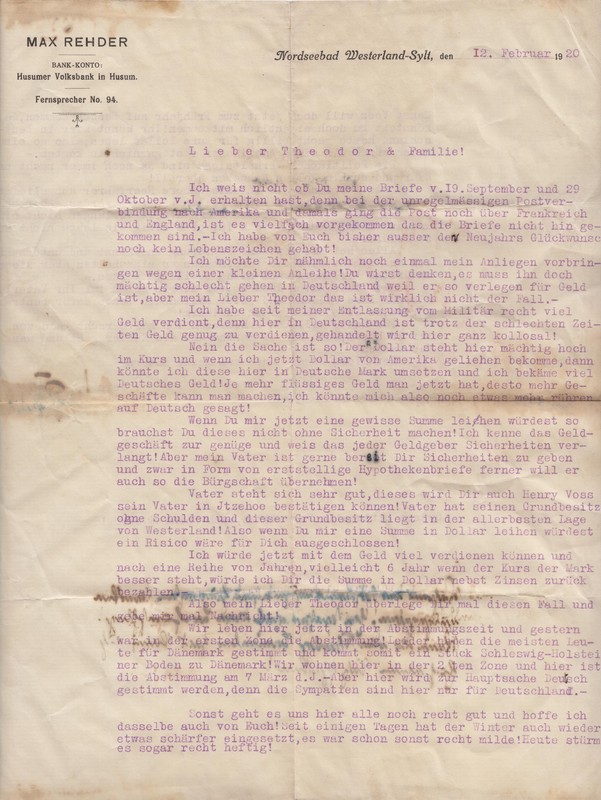 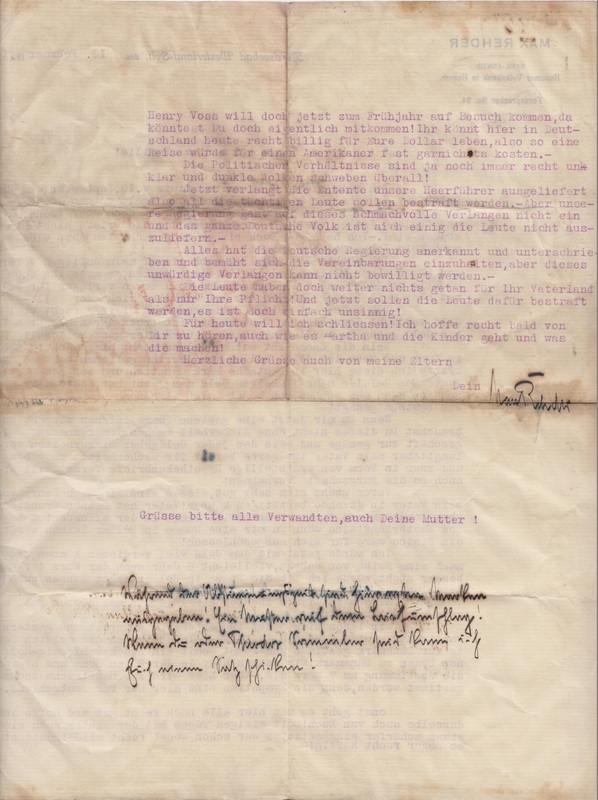 I do not know if you have received my letters of Sep 19 and Oct 29 of the last year, because of the inconstant postal traffic to America. It used to go through France and England back then; it often happened that the letters did not arrive. I have not heard from you except for your greetings for New Years!
I once again want to tell you about my request concerning a small loan. You must think that we are having a hard time here in Germany, because he is so short of money, but that, dearest Theodor, is really not the case.
I have earned quite a lot of money since leaving the army, because it is still possible to make enough money in Germany and even though we are going through hard times, there is still a lot of trading going on!
Well, the thing is, the dollar rates are very high here, and if I could now borrow dollars from America, I could exchange them into German marks and I would get a huge amount of German money! The more cash money you have, the more deals can be made, and I could provide for myself a bit better so to speak!
If you were to lend me some amount of money you would not have to do it without security! I am familiar with the handling of money and know that sponsors demand a security! But my father is willing to give you this security, by giving you first-ranked mortgage certificates and he will also grant a guarantee!
Father is doing very well, Henry Voss's father from Itzehoe can confirm that! Father owns a debt-free estate und this estate is in the best location of Westerland! So, if you were to lend me an amount in dollars, you would not have to take any risks!
I could make a lot of money with it now and after a couple of years, maybe after 6 years, when the exchange rate is better, I could repay you the amount in dollars including interest.
So, dearest Theodor, think about it and tell me what you think!
At the moment, we are living in the times of election and yesterday it took place in the first zone! Unfortunately, most of the people voted for Denmark, which means that parts of Schleswig – Holstein will now be Danish territory! We are living here in the second zone and the vote will be on March 7 of this year. But here people will mostly vote for Germany, because the sympathies here are with Germany.

Apart from that we are all doing quite well and I hope you do, too! Winter has been harsher over the last couple of days, it was rather mild before! Today it is really stormy!
Henry Voss now wants to visit us during spring, maybe you could join him! You can live cheaply here in Germany with your dollars, a trip here would cost you Americans almost nothing.
The political situation is still pretty unclear and dark clouds are everywhere!
The Entente is now demanding the extradition of our military leaders, so all the competent people are to be punished. But our administration is not going to submit to these shameful demands and the German people are all agreed on not letting the people be extradited.
The German administration has agreed to everything and signed and is eager to follow the agreement, but this dishonorable demand cannot be accepted.
These people have done nothing else for their Fatherland than doing their duty! And now they are to be punished for it, it just does not make any sense!
I will end this letter now! I really hope to hear from you really soon, also how Martha and the children are doing and what you have been up to?


Please send my regards to all the relatives and your mother!

During the vote, first stamps have been issued! A sample is on the envelope! If you, Theodor are a stamp collector, I can get you a set!

Letter from Max Rehder to relatives in Iowa in 1920. He comments pessimisstically upon the post-war sitation and local business prospects.