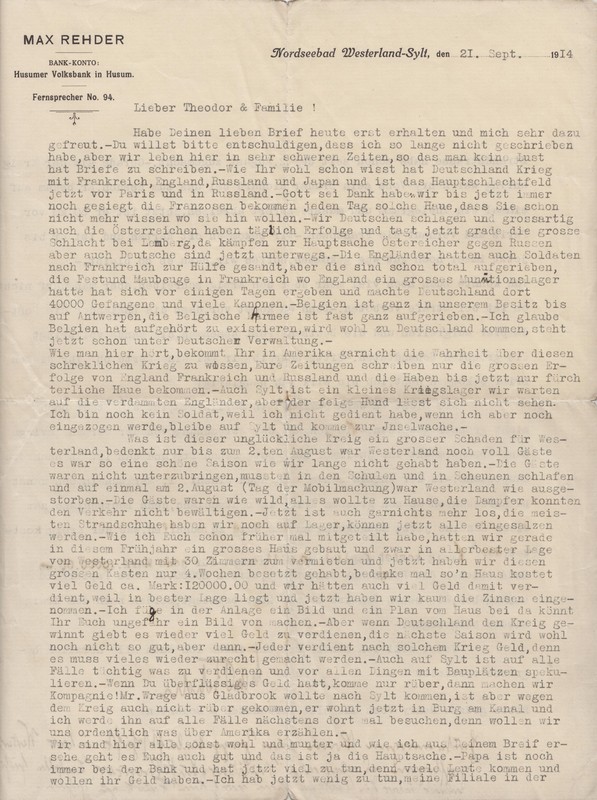 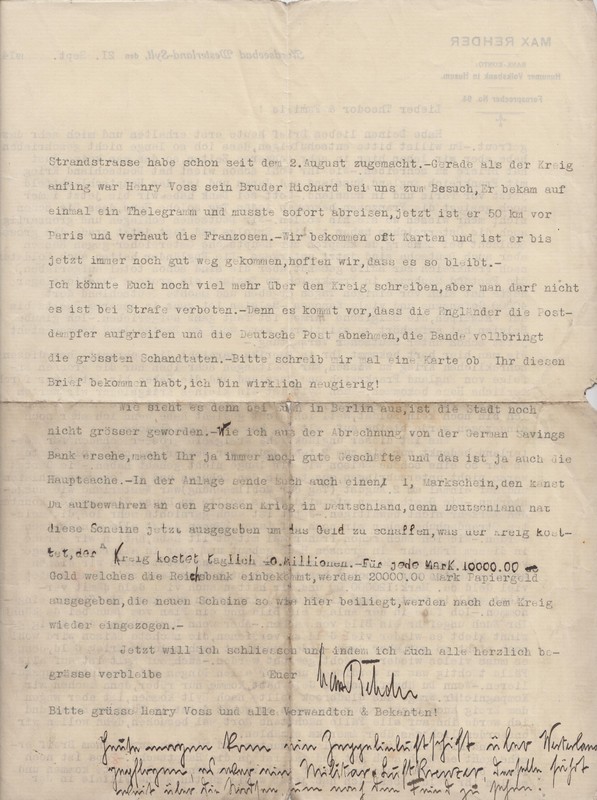 I have only received your lovely letter today and I am delighted. You will have to pardon me for not sending you any letters in such a long time, but we are going through some very hard times here at the moment and I do not feel like writing any letters. As you may know, Germany is at war with France, England, Russia and Japan and the main battle field now is in front of Paris and in Russia. Thank God, we have triumphed up until now, the French are getting a beating every day, by now they do not even know where to go to. We Germans are doing really well, even the Austrians are winning on a daily basis and at the moment we are having the great battle of Lemberg, where mainly Austrians are fighting against the Russians. But the Germans are also on their way. The British have also sent soldiers to France for help but they are already wiped out. The fortress Maubeuge in France, where the British had a large ammunitions depot, surrendered a couple of days ago and gave Germany 40,000 captives and many cannons. Belgium is totally occupied by us, except for Antwerp, and the Belgian army is almost completely wiped out. I think Belgium has stopped existing and probably will join Germany, it is already under German administration anyway.
As we are told here you do not learn anything true about this disastrous war over in America, your newspapers have only written about the great victories of England, France and Russia, when really all they got were beatings. Sylt is also a small camp, we are waiting for the damn British, but these cowards are nowhere to be seen. I am not a soldier yet, since I had not served in the army, but if I get drafted, come to Sylt and go to the guard station.
What damage this miserable war has brought to Westerlandf, just think, until Aug 2 Westerland was full of guests, we have not had such a beautiful season in a long time. There was not enough room for all the guests, they had to sleep in schools and barns and then all of a sudden on Aug 2 (the day of the mobilization) Westerland was like a morgue. The guests were wild, everybody wanted to go home, the steam ships could not cope with the traffic. There is nothing going on here now, we still have most of our beach sandals in the warehouse, they can be salted now. Like I told you back then, this spring, we have built a big house that is in the very best location of Westerland, with 30 rooms for rent and now we have only been able to rent this big house out for 4 weeks. Just think such a large house costs a lot of money, approx. 120,000.00 and we could have made a lot of money with it, because it is in the best location, and now we have barely earned the interest. I will add a picture of it and a construction plan, so you can picture it. But when Germany wins the war, there will be a lot of money to be earned, the next season might not be as good. Everyone can make money after the war, because so many things have to be repaired. On Sylt, there will also be the possibility to make money and speculate with construction sites. If you have extra money, come over and we will make a deal! Mr. Wrage from Gladbrook wanted to come to Sylt, but decided not to because of the war, he now lives in Burg on the canal und I will definitely visit him there soon, so we can talk a lot about America.
We are all fine here and as I can see from your letter you are also doing well and that is the main thing. Dad is still working in the bank and has a lot to do because many people come and want their money. My branch in the ,,Strandstraße“ has been closed since Aug 2. Henry Voss and his brother Richard were here for a visit right when the war started, he then received a telegraph and had to leave immediately, now he is 50 km away from Paris and beats up the French. We often receive postcards and until now he has always been able to escape, let us hope it stays that way. I could write you a lot more about the war in this letter, but we are not allowed to by law. It happens that the British seize the post ships in order to take all the German post, the bandits perform the most evil actions. Please, send me a card and tell me if you have received this letter, I am really curious!
How is it in Berlin [now Lincoln, IA], is the city getting any larger? As I can see from the statement of the German Savings Bank you are still doing some great deals and that is the main thing. I will add a 1 mark note in the attachment, you can keep it to remember the great war in Germany, because Germany has now emitted these notes to finance the war, which costs 40 million daily. For every 10000.00 mark in gold that is given to the Reichsbank, 20000.00 mark will be issued in paper money, the new notes, just like the one I added, will be retracted after war.

Now, I will end this letter and am sending my sincere greetings to all of you,

Please, send my regards to Henry Voss and to all of the relatives and acquaintances!

This morning a zeppelin airship came flying over Westerland, it was a military air cruiser. It was flying far over the ? to see the enemy

Letter from Max Rehder in early years of First World War to relatives in Iowa. Max is notably confident and strikes a cheery tone.