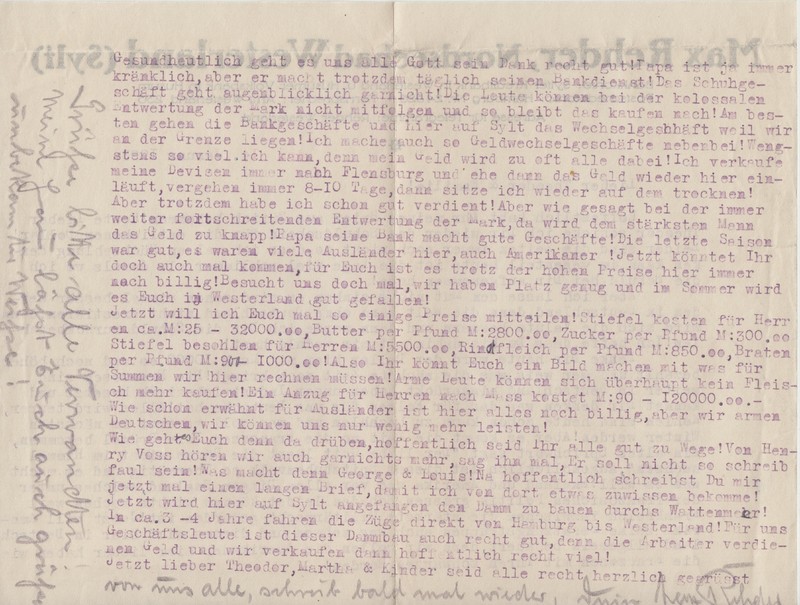 Hopefully, you have received my letter from Zurich! Today, dearest Theodor, I once again send you the debt obligation for the money you gave me. Unfortunately, times are still not as good and I cannot repay you yet. Today the situation is even worse than it was back then when I borrowed money from you!
But I refuse to lose hope, it will surely get better in Germany, because the world cannot exist without Germany. The ratings will improve and then I will repay my debt to you! I hope you will bear with me until then!
Just think, right now the dollar is traded at 10,000.00 marks and sometimes even higher and who knows what will happen soon! The French have pushed further into Germany, invaded our industrial district and you can only imagine the consequences for the German people! Everything is getting more expensive, coal is already barely affordable and now how will it be next winter? But the time will come when the French will be beaten, an old saying goes: “God does not let trees grow in heaven” currently these scoundrels are so boisterous and they are doing whatever they want to do! England and America, but especially England, which is suffering under the French policies, cannot do anything because the French military is now the strongest! Now America also wants to withdraw its occupying troops and this is deplored deeply by the Germans, because we would rather have the Americans here, instead of the French with their black hordes!

Health-wise we are all doing fine, thank God. Dad is always sickly, but he still does his banking every day! The shoe shop is not working at all! People cannot cope with the tremendous devaluation of the mark and so they do not buy anything! Banking is doing the best, and here in Sylt the exchange business is good, because we are located right at the border! I work in exchange every now and then! At least as much as I can, for I am out of money too often! I always sell my foreign currency to Flensburg, but because it takes 8-10 days for me to get my money back, I am broke again before I get it. But I have still made quite a lot of money! But like I said, because of the constant devaluation of the mark, it would not even be enough for the strongest man! Dad's bank is doing great! The last season was very good because there were many foreigners here, also Americans! You could also come over for a visit now, even though the prices are high, it will be quite cheap for you! Come and see us, we have enough room and you will like Westerland in the summer!
Now I want to inform you about some of the prices! Boots for men approx. 25-32,000 M, a pound of butter 2,800 M, a pound of sugar 300 M, resoling men's boots 5,500 M, a pound of beef 850 M, a pound of roast meat 900-1,000 M! Now you can imagine what sums we have to calculate with! Poor people cannot buy any meat anymore for themselves! A tailored suit for men costs 90-120,000 M. Like I said before, it is still cheap here for foreigners, but the poor Germans can only afford a little for themselves!
How are you over there, hopefully you are all doing well! We have not heard from Henry Voss in a while, tell him he should not be so lazy about writing! What are George and Louis doing! I hope you will write me a long letter, so that I can hear from you over there!
They are now starting to build a dyke through the mudflats here in Sylt! In 3-4 years the trains can go directly from Hamburg to Westerland! For us businessmen the construction of the dyke is a good thing, because the workers make money and we can hopefully sell a lot!

Now, dearest Theodor, Martha and children, I send my kind regards to all of you, write soon again,
Max Rehder
Please, give my regards to all relatives! My wife also sends her regards though you have not met!

Letter to Theodor Rehder from Max Rehder in January 1923 from Sylt, Germany.